Mark's News | MEET MARK KERN
As an alderman, mayor, and now as County Board Chairman, Mark is fighting hard to bring quality jobs to St. Clair County. Mark has always ensured that the citizens of St. Clair County have a strong voice in the political process. Mark is dedicated to making our community a great place to raise a family and build a business.
chairman, mark kern, kern, illinois, government, st. clair county, board member, alderman, illinois chairman
6
page-template-default,page,page-id-6,ajax_fade,page_not_loaded,,vertical_menu_enabled,select-child-theme-ver-1.0.0,select-theme-ver-3.2.1,wpb-js-composer js-comp-ver-4.2.3,vc_responsive

MARK KERN was born and raised in Belleville and attended Belleville East High School. After graduation from Belleville East, Mark enrolled in Millikin University and graduated in 1985 with a B.S. in Business Administration. He continued his education at Washington University where he received a Juris Doctorate degree in 1988 and an M.B.A. in 1991.

He became an alderman in the City of Belleville in 1993 and in 1997 was elected Mayor. Mark was the mayor for seven years until he was elected St. Clair County Board Chairman. He was re-elected in 2008 and 2012.

Mark believes strongly in giving back to the community. In 1997, Mark, his wife Erin, and a dedicated group of volunteers organized Gifts from the Heart, an event that raises funds to purchase toys and clothing for St. Clair County families in need. Their efforts have enabled Santa Claus to deliver nearly $250,000 worth of Christmas cheer over the past 15 years. Each year, Mark also donates bicycles and food to neighborhood “Back to School” picnics and is a generous supporter of numerous charities throughout the community.

Since taking office as County Board Chairman, Mark Kern has demonstrated ongoing support and advocacy for children’s health and well-being. From the beginning of his term as Board Chairman, Mark identified the need for adequate prenatal care and the health and well-being of children as important public health issues. Accordingly, he has been a strong supporter of health services offered by the St. Clair County Health Department and the East Side Health District. Additionally, he is a determined advocate for senior citizens establishing the first St. Clair County Office on Aging to help older adults easily attain the services they need and deserve.

He has initiated clean up programs for citizens throughout St. Clair County. As Mayor he began the first City Wide Clean Up, a program enabling residents to dispose of items they no longer needed free of charge. As County Board Chairman, he continued his clean up efforts by beginning the St. Clair County Clean Sweep Program that aids neighborhoods with clean ups and provides dumpsters to citizens. Through this program to date more than 10.5 tons of debris and over 100,000 tires have been collected from communities throughout St. Clair County and disposed of as a service to the residents.

Mark is involved in many organizations throughout St. Clair County. He is a member of the Shriners, Elks, Moose, Optimist, Exchange Club, Turkey Hill Grange Association, Scottish Rite, Missouri Bar Association, the National Rifle Association and numerous Chambers of Commerce.

He is a member and past chairman of the East-West Gateway Council of Governments where he has been instrumental in obtaining necessary funding for infrastructure projects throughout the region. He is the past Chairman of the STARRS (St. Louis Area Regional Response System) Board and Chairman of the East Side Health District Board.

Mark has been the recipient of the Belleville Jaycees Distinguished Service Award, Outstanding Government Administrator of the Year, Doctor of Humane Letters from Lindenwood University, Racial Harmony Outstanding Community Service Award, NAACP Stellar Award, the Sibley Medallion of Honor Award from Lindenwood University, the Grey Warner Award from the Illinois Association of Community Action Agencies, and the Crystal Wagon Award from Cardinal Glennon Children’s Hospital. In 2012, he received the Outstanding Local Government Achievement Award from the East-West Gateway Council of Governments.

Mark married Erin McMullen in 1991, and they have three children: Fred, Laura and Matt. 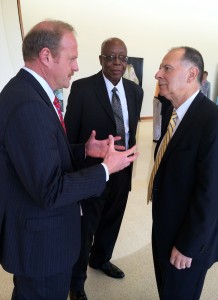 East Side Health District Board

Outstanding Government Administrator of the Year

Years as a Father